Wet and warm weather continues in 2021. Most vegetable regions are likely to see warmer and wetter than average conditions.

The rest of summer and beginning of autumn are likely to be wetter than average for most vegetable growing regions, with the highest chance (up to 80%) of above average rainfall in Queensland vegetable regions, Atherton Tablelands to Stanthorpe. Above average rainfall (65% chance) is expected for vegetable regions in New South Wales (from Northern Rivers district, across the Sydney basin to the Murray River), north coast of WA (from Carnarvon, across Broome to Kununurra) and parts of Victoria (Werribee, Melbourne sand belt, Mildura, Robinvale, Swan Hill).

At this stage it is unsure whether the influence of La Niña, considered the main driver for this wet weather, has already peaked. La Niña typically increases the likelihood of above average rainfall across eastern and northern Australia during summer.

La Niña usually brings cooler conditions. However, the unusual heat of 2020 continues in 2021 with days in February to April likely to be warmer than average across most coastal vegetable regions of western WA (Pemberton, Manjimup, Perth to Geraldton), NT (Darwin), Queensland (Ayr, Bowen, Gympie), New South Wales and most of South Australia, Victoria and Tasmania (Figure 2).

Night-time temperatures for February to April are likely to be warmer than average for all vegetable growing regions (80% chance).

Last year has been declared Australia’s fourth warmest year on record (1.15 °C above average). Australia's climate has warmed by around 1.44 °C since 1910, most likely due to global warming caused by human activities. 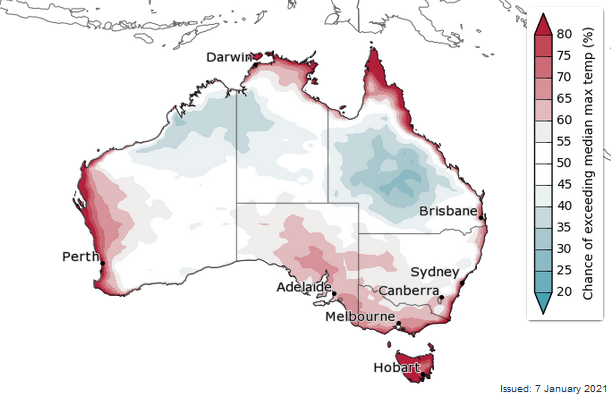 What it means for your soil moisture and crop protection

While the outlook indicates wetter than average conditions, rainfall – even if above average – is not likely to be sufficient to relieve long-term rainfall deficits in southeast Queensland (incl. Bundaberg, Toowoomba, Stanthorpe, Lockyer Valley), NT (Katherine), northeast NSW, SA and southwest WA (Figure 3). Therefore, it is paramount to stay on top of your irrigation management in the next three months. For more information on irrigation tips and tricks, and how to meet your crop water use, visit the many and varied resources on the Soil Wealth/ICP website: www.Soilwealth.com.au.

Additionally, the predicted above-average day/night-time temperatures for most vegetable regions might create considerable pest and disease threats. Use an extensive monitoring program and integrated control strategy to keep these at low levels. 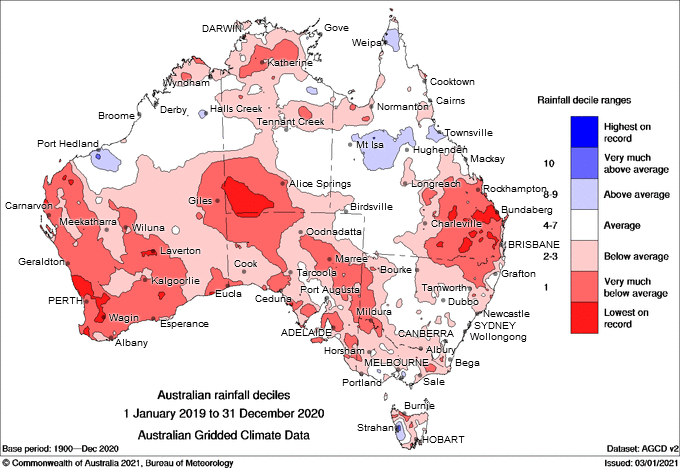