Ag-tech trial turns up the heat on weeds

Problem weeds such as oxalis and nutgrass could be a thing of the past for vegetable growers following an Australian-first trial of microwave weed control technology at our Koo Wee Rup demonstration site in Victoria.

In November and December 2020, the Soil Wealth ICP team partnered with ag-tech company Growave to investigate the effect of a prototype unit which aims to reduce herbicide use within the horticulture industry using microwave technology (Figure 1). 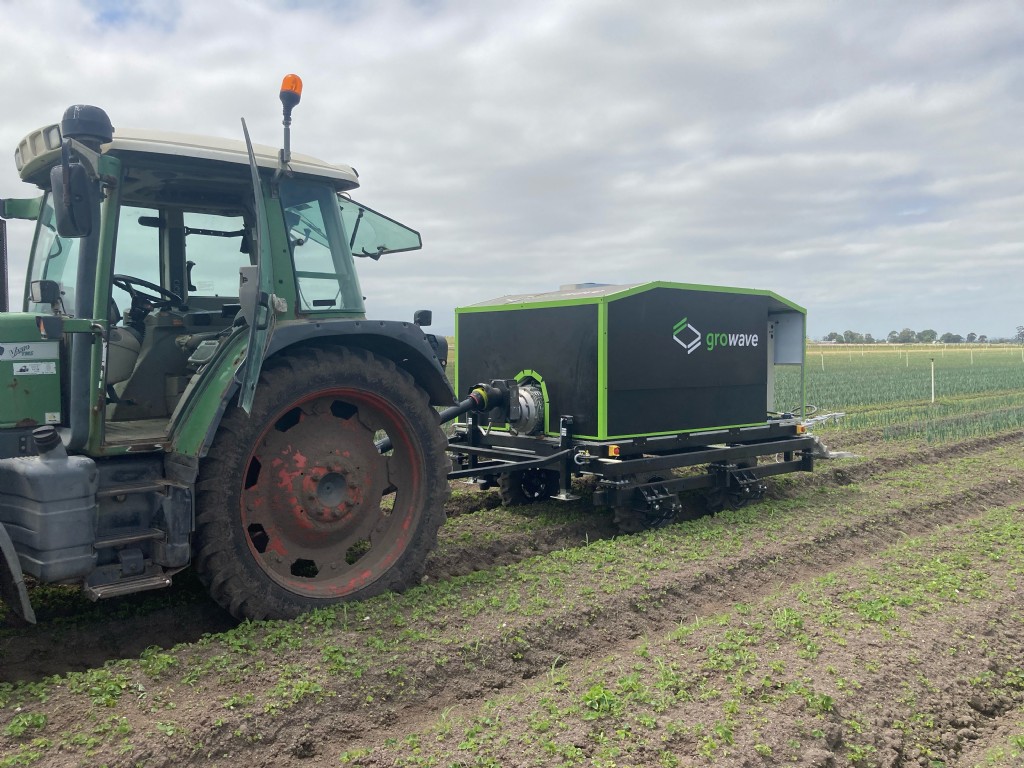 The Koo Wee Rup demonstration site is no stranger to precision agriculture technologies, having trialled gridded and pre-plant soil testing, variable rate spreading, drone technology and remote insect monitoring since 2018. You can read more about these trials here.

The site has a rotation of leeks – rye grass cover crop – celery – leeks. Due to intensive summer and winter vegetable production, the site faces many challenges around soil health, with variations in crop quality and marketable yield due to nutrition constraints, poor drainage and waterlogged soils.

There is also insect pest damage, particularly in celery, and competition from weeds. Added to this, the challenge of limited herbicide control options for some crops and increasing resistance issues.

The trial specifically aimed to measure the impact of the microwave technology on emerged weeds and soil treatments to reduce the weed seed bank and better manage problem weeds such as oxalis and nutgrass (Figure 2).

Figure 2: Different modes of action of the microwave weed technology

Early field trials are proving efficacy of the technology in multiple crop types, with the ability to control pre-emerged and emerged weeds in one treatment.

Similarly, the treatment of soil in the presence of emerged weeds demonstrated the established weeds absorbed the microwave energy killing the above ground part of the weed. There was some weed re-emergence in the treated area after three-weeks, however the main issue was edge creeping and re-emergence of oxalis (Figure 4).

The trial has highlighted the benefit of one treatment in managing problem weeds, with control in both emerged and pre-emerged weeds at the same time. As no chemicals are required to manage weeds, this has led to improved produce and worker safety, as well as flexibility in application with no more worrying about wind, rain, weed growth stage or withholding periods.

You can find out more about the microwave technology by watching our future of Integrated Weed Management (IWM) in vegetable production webinar recording.

Where to from here?

The team will use the valuable data from the site to inform the development of a second version of the prototype, which is currently underway. The Soil Wealth ICP demonstration site in Richmond, Tasmania, will also provide further testing on different soil types and crops.

Growave is working towards commercialisation of the unit by conducting further trials in the first half of 2021 to improve factors such a travel speed (decreasing time per hectare and fitting into the farm planting cycle), extending the length of effective weed kill to four weeks with 90% effectiveness, and increasing the unit’s robustness for consistent and reliable use within farm operations.