Andrew and Zurri Braham have grown capsicums under greenhouse on their farm in Virginia, South Australia, since 2006.

Braham Produce now has a strong reputation in the market for producing exceptional quality capsicums. Many factors contribute to this success, including the use of compost and boosting soil microbiology.

Through a demonstration site trial, the Soil Wealth ICP project is working with Braham Produce to showcase some of their work on using organic amendments, biofumigation and other soil health management practices in a protected cropping production system.

Continuous cropping with capsicums puts pressure on soil health, which can lead to a build-up of soil-borne pathogens such as root knot nematodes and damping off fungi.

Following the Telone treatment, quality compost is incorporated into the soil at high rates together with a soil microbial inoculant to restore diverse soil biology.

In 2019, the effect of an additional biological nematode control product and a mycorrhiza inoculant were assessed in a demonstration trial. The trial investigated if a combination of both products increased plant vigour, longevity and fruit set (i.e. a longer harvest season), higher yield per plant, even growth and good fruit quality.

Soil microbiology test results confirm that the addition of beneficial microbiology and compost treatments have had a positive impact on mycorrhiza colonisation, as well as soil microbiology levels, in Andrew and Zurri’s capsicum crop (see Figures 1 and 2). 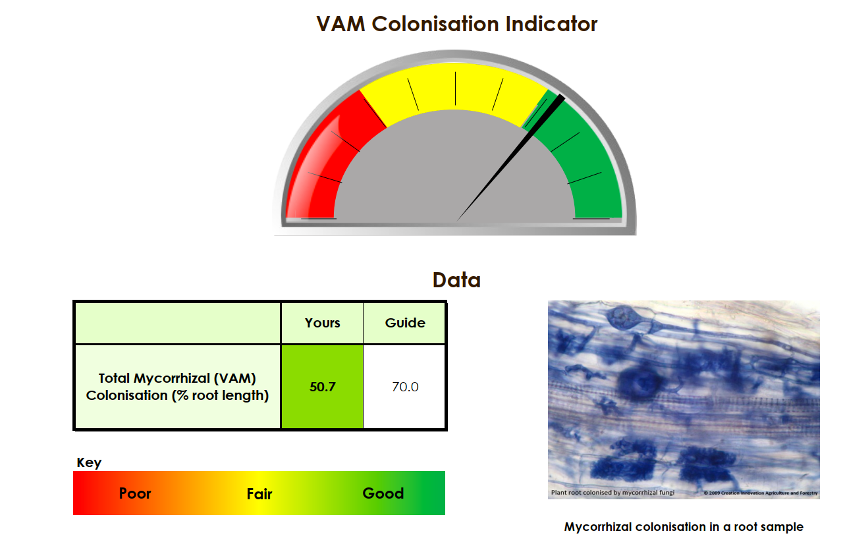 “When we plant, we inoculate all plants with a mycorrhizae product for the first two weeks, let it colonise and then apply other nutrients through the soil,” Andrew said.

“We add fertiliser in microdoses every time we irrigate. It has made a big change to the way we grow and how we grow and the results that we’re getting. Our yields are going up every year and we’re going forwards, not backwards, so we know that the practices we’re doing are making a good change for us.”

Applying green manure compost on an annual basis has also had a positive impact on soil health.

“We add compost every year to our soils so we’re actually building our organic matter and giving the soil a new food source every year,” Andrew said.

“We’ve found that really important not just for the health of the soil but also for water retention and the way the soil builds and replenishes its own microbes.

“With the combination of doing the soil test and fumigation, we can also control the nematode numbers really well and we had really good results with that over the years.”

While this approach has worked for Braham Produce, Andrew stresses that growers should tailor their soil health approach to their own property.

“You’ve got to do what’s right for your soil, your water and your climate so it’s a big thing to monitor and concentrate on your area.”

You can hear more from Andrew and the trial at Braham Produce in this webinar recording from our Soil Biology Masterclass 2021.