A challenging 2020 will end wetter than average for most regions. This will allow regions still suffering from water shortages to start to recover. However, rainfall events may cause disruption to farm operations. Keep an eye on those 7 day forecasts.

October to December is likely to be wetter than average for all vegetable growing regions (over 65% chance in most of the areas), except for western WA (Perth metropolitan, Manjimup, Pemberton, Geraldton, Carnarvon) which is likely to have an average rainfall in the last three months of 2020 (see Figure 1).

The main drivers of this wetter than usual year’s end are two weather phenomena – La Niña, likely to develop in the coming months, and a negative IOD (Indian Ocean Dipole) index, predicted to be met in October. Typically, these increase the likelihood of above average rainfall across much of Australia during spring and early summer. 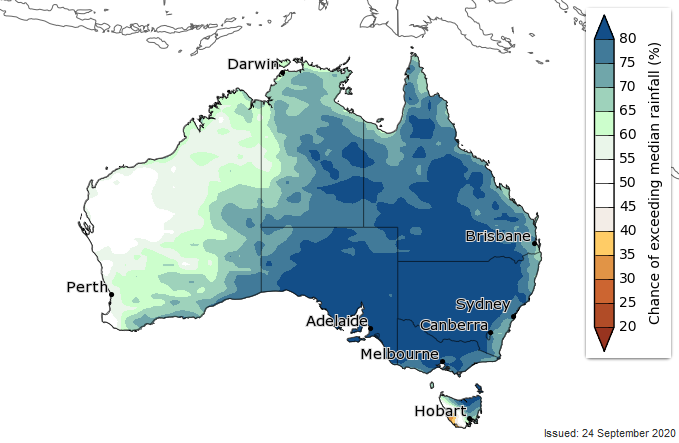 Days are likely to be warmer than average during October to December across the coastal regions of northern WA (from Perth to Kununurra), NT (Katherine, Darwin) and north Queensland (Ayr, Gumlu, Bowen), and the far southeast of Australia (from Werribee, Melbourne sandbelt, over Gippsland into Tasmania) (Figure 2). Cooler days are likely (60 to 75% chance) for much of southern WA (Manjimup, Pemberton), SA, NSW and central to southeast Queensland (Emerald, Bundaberg, Gympie, Toowoomba, Stanthorpe, Lockyer Valley).

Nighttime temperatures for October to December are very likely to be warmer than average for all vegetable growing regions (over 80% chance). 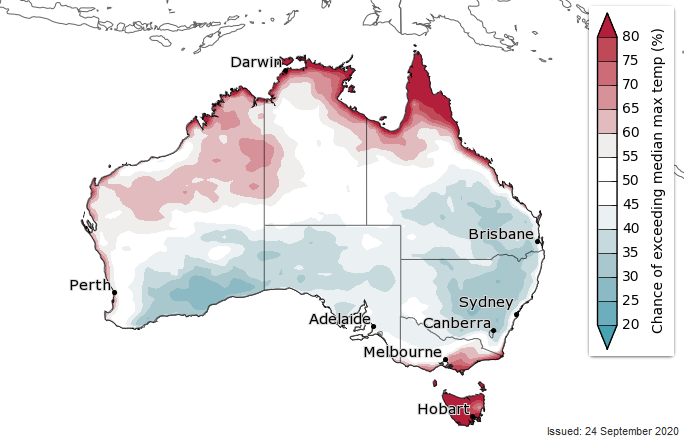 What it means for your soil moisture and irrigation planning

The forecast of a wetter than usual spring is good news for many vegetable growing regions that have had two dry years. the forecast rains will reduce dependancy on irrigation and start recharging surface and groundwater, especially in regions with lowest rainfall on record over the last two years like southeast Queensland (incl. Bundaberg, Toowoomba, Stanthorpe, Lockyer Valley), northeast NSW, SA and southwest WA (Figure 3).

However, there is an increased chance of farm operations being disrupted by rain events. Keep an eye on those 7 day forecasts, but be wary about specific rain forecast beyond 7 days.

Additionally, the predicted above-average maximum temperatures for some regions, together with warmer than average nighttime temperatures for all vegetable growing regions, will increase crop water requirements and may increase disease risk.

Therefore, consider getting your irrigation started in time to avoid your crops lagging behind for the rest of the season. For more information on irrigation tips and tricks, and how to meet your crop water use, visit the many and varied resources on the Soil Wealth/ICP website: Soilwealth.com.au. 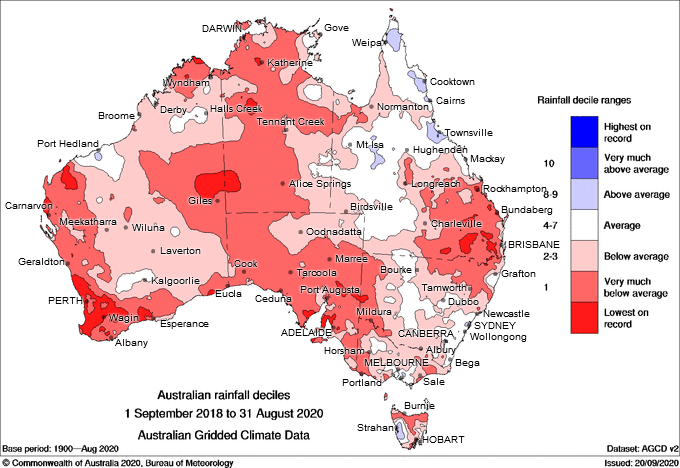