A group of Australian growers and industry representatives recently attended the 4th biennial international spinach conference in Mercia, Spain. Among the wide range of topics presented they heard about research on key diseases with a strong emphasis on those affecting crops across Europe and North America. Some of these diseases pose a significant biosecurity risk to Australian producers while others are already affecting local crops.

Worldwide the most economically important disease of spinach is Downy Mildew caused by the fungus-like oomycete, Peronospora effusa. Managing this disease with resistant spinach varieties has been largely successful and seed companies globally devote considerable effort to incorporating resistance genes into their commercial varieties. There were several presentations on recent studies that are mapping the genetic code of the pathogen as well as finding genetic markers for resistance genes in spinach plants. This will hopefully facilitate breeding of new disease-resistant varieties. Unfortunately controlling spinach downy mildew has become more challenging in recent years largely because of the emergences of new pathogenic races that overcome resistance genes in available commercial varieties. There are currently 16 known races and new ones are appearing at an ever increasing rate, including a recent outbreak of a potentially new one in Australia. Access to resistant spinach varieties is critical given the rapid production cycle of baby spinach crops – as quick as 21 days from seeding in warmer months thus making it less desirable to use chemical management options. Organic producers (50% of production in California and worth $US150M) are solely reliant on availability of resistant varieties. Identifying new races of the pathogen is currently laborious given that the pathogen has to be inoculated onto a panel of varieties with known resistance genes and kept under environmental conditions that favour disease development. P. effusa also has some features that make it difficult to work with; in particular it can’t be cultured away from spinach plants so any experimental work has to be done with spores collected from an infected plant. Unfortunately, the common spores causing the typical downy growth under leaves (sporangia) are short-lived and most attempts to send them to Europe from Australia for race-tying have failed. This leaves Australian spinach producers vulnerable as it requires an international effort to confirm new races and breeders rely on races to be officially characterised before including them in their breeding programs. Therefore access to a local race testing service would be of great assistance to the industry in Australia, at least until the development of genetic tests which are still some years from being ready. 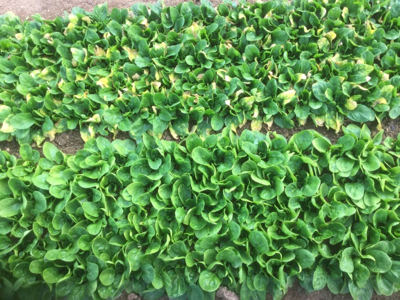 One point of controversy regarding spinach downy mildew is that several researchers have shown that the sexual spores (oospores) of P. effusa can be detected on the surface of commercial seed. Some in the industry have argued that there are insignificant risks with seed-borne infection of this pathogen.  However, detection rates were surprisingly high with oospores found in nearly one-fifth of 168 seed lots. Moreover about half of these oospores were shown to be able to germinate and therefore serve as primary inoculum to initiate disease. Standardised testing protocols are now being developed and should be available soon through a global regulatory body, the International Seed Federation. Adoption of these protocols should reduce risks for global spread of new races. 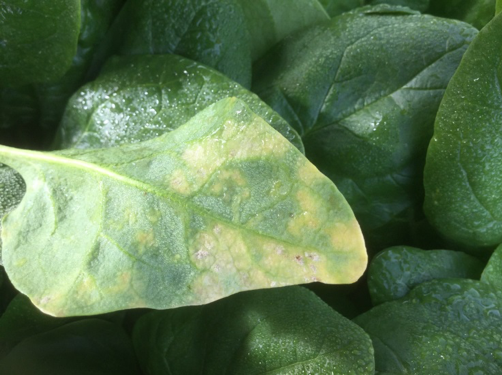 Downy mildew was not the only disease discussed at the conference. Len Tesoriero presented Australian research on integrated management of spinach damping-off caused by Pythium species and Rhizoctonia solani. He reported that metalaxyl-M seed dressing was effective for controlling Pythium species but no chemical or biological treatments to date have been successful for reducing Rhizoctonia rot. Earlier applications of such treatments (prior to sowing) are currently being investigated as a way to suppress Rhizoctonia.  A Dutch research student spoke of a similar integrated approach to this disease with an emphasis on seed vigour as a critical component in increasing tolerance to damping-off. A Texan researcher spoke about a different R. solani strain that causes an aerial blight in addition to a root and crown rot of bunching spinach. Lindsey du Toit from Washington State spoke on developing a new genetic test for detection of Fusarium wilt of spinach. Although Fusarium wilt occurs in Australia it appears to only be important in some areas of Victoria where it interacts with other damping-off pathogens causing a disease complex. Fusarium wilt is more important in bunching spinach and seed production as it develops more slowly than the damping-off pathogens. Lindsey also spoke of a seed treatment with a bacterial metabolite called natamycin which was combined with a proprietary seed priming treatment to suppress development of the common leaf spot pathogen, Stemphylium botryosum as well as vascular wilt pathogens, Verticillium spp. and Fusarium. One caveat of this work was that longer priming durations and higher natamycin levels caused adverse effects on seed germination. It’s also possible that different varieties or physiological ages of seed might respond differently to priming durations so additional testing is currently being carried out. 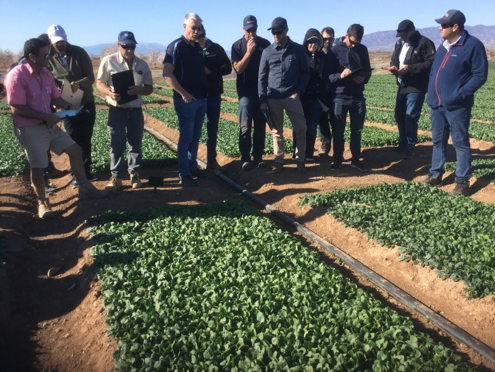 One disease of some biosecurity concern to Australian producers is spinach white rust (white blister). It is caused by Albugo occidentalis, an oomycete relative to the downy mildews. It has been a problem to spinach production in Texas since the late 1930s and spread to other US states such as Arkansas and along the Atlantic coast. However, it has been detected more recently in Greece (2013), Mexico (2017) and Turkey (2018). If it were to spread to a seed production area then it would become a significant biosecurity risk to Australia as it can spread with seed.

From a plant pathologist’s standpoint this international spinach conference provided a wealth of information about the current research being conducted around the world and where knowledge gaps or threats may pose disease risks to Australian growers. Hopefully this increased awareness can be used to mitigate these risks.

The international Spinach study tour project was funded by Hort Innovation using the vegetable R&D levy and contributions from the Australian government. 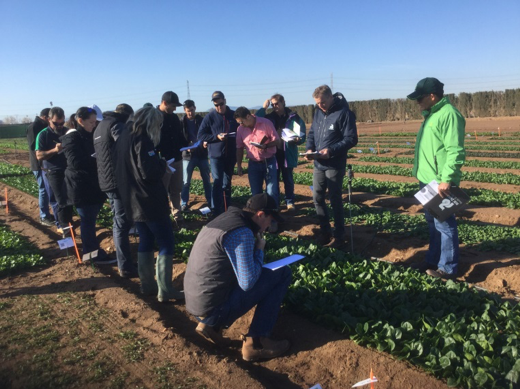