Irrigation monitoring in potatoes Part 1: Practical use of IrriSAT and soil moisture sensors

Irrigation monitoring in potatoes Part 1: Practical use of IrriSAT and soil moisture sensors

The 1,000 ha farm is located at Billimari near Cowra, NSW, on loam and sandy loam soils. It has been producing processing potatoes (var. Snowden) for the past nine years and the grower was interested in trying some new tools to manage his irrigation.

Marc Hinderager and Dr Kelvin Montagu from AHR’s Soil Wealth team were interested in how the satellite-based irrigation scheduling app, IrriSAT™, which estimates the daily crop water needs, could be combined with tools which measure soil moisture directly in the root zone of the crop. https://irrisat-cloud.appspot.com/

The direct soil moisture measurement tool they chose was the Wildeye™ system which uses a technique known as TDI (time domain reflectometry) to measure soil moisture at two depths, and uploads the data to a website for access www.mywildeye.com/. The project team do not endorse Wildeye over other soil moisture monitoring systems.

The crop was planted on the 27 October 2019 on half an irrigation pivot (13 ha). Two soil moisture sensors were installed in the half pivot on the 10 December 2019, 44 days after planting, and were monitored throughout until the crop was harvest on the 15 February 2020. The IrriSAT app was used on the same area from planting to harvest.

This demonstration followed a large potato grower’s pivot irrigation practice on variable sandy loam to loam soils. Based on information from IrriSAT and soil moisture monitoring, Marc and Kelvin provided the grower with useful information about irrigation requirements for this crop, aiming to keep within the allowable depletion amounts and field capacity range of 65% to 85% soil moisture. Ultimately, all decisions were made by the grower and documented for learning and sharing in this case study. 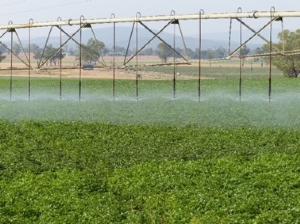