Lessons from continued innovation in weed management in Clyde, Victoria

Schreurs & Sons is a large and successful vegetable growing business based in Clyde, Victoria. Their Koo Wee Rup farm is also a demonstration site under the Soil Wealth ICP project.

In the first video, Adam discusses their IWM approach, which includes a mix of methods at different stages of the crop life, and during the fallow period.

One of the keys to Adam’s success is his continued willingness to explore new ways of managing weeds, learning from his neighbours and peers, industry research, and his team’s own on-farm trials.

Carl shares his perspective on the reasons behind Adam’s success, not only in weed management but in crop management innovation. He discusses some of the ways in which Adam’s story provides a positive example for other growers to emulate.

In recent years, the Schreurs & Sons team have reverted to using weed management methods that reduce their reliance on herbicides in their vegetable crops. This decision came after they noticed that the limited herbicide options available to them were becoming less effective.

In the second video, Adam explains how introducing stale seed beds and inter-row cultivation into their IWM approach has helped them address this issue, while also allowing them to employ herbicides more strategically and with greater success.

There's also a written version of the case study available with further detail and images.

The VG15070 team are grateful to Adam Schreurs and the team from Schreurs & Sons for sharing the story of their success, and to Carl Larsen from RMCG for providing his thoughts on the example their IWM strategy provides to the industry. 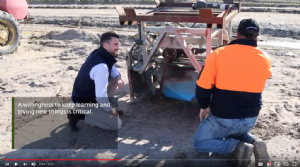